17 h, 09m left: I’m up again and ready to finish my game. I thought of sime minor adjustments while sleeping that I already implemented. First thing today I will give sounds another try after I spent another hour yesterday trying to get something Reggae-like from Music Maker 16, now I’m trying FL Studio.

15 h, 00m left: After some trouble with the laptop and an intruduction to FL Studio by the boyfriend I tried my luck with music composition. Let’s just say I’m even worse at it than I am at doing graphics but I now have something that sounds like Reggae. On to the next task!

12 h, 36m left: One of these times were I hate everything and everyone but mostly myself. Spend at least 1,5 hours to figure out why buttons that were next to each other weren’t working. To be specific when you clicked on the right button the function of the left button executed. I finally figured out that the underlying bitmap was wider than the button itself. The good news is, I now have a save and a mute button that work.

10 h, 5m left: I updated some placeholder graphics, added some sort of tooltips (or at least the implementation, text still has to be written) and a place on screen for the achievements to go. Achievements is next up although I have to admit that I’m currently having a little phase of being tired. But I suppose that is normal during such an intense time of coding. Luckily my boyfriend is cooking dinner right now so I’ll take a break soon.

8 h, 18m left: Achievements are working and a first version of my game is up and running for some friends to test it. Hoping they don’t find to many bugs and give me a better idea for balancing. The problem with incremental games in a game jam is that they take a lot of time to test properly. I had to deactivate the tooltip for now as it’s not working the way I want. But that’s not the most important thing now. Next I’ll implement the loading of saved games and improve all current functionalities. Maybe after that I’ll have time for some kind of police interference.

5 h, 42m left: Friends did find some bugs but they are taken care of now. But the loading proved to be a pain so I’ve given up on it for now. Right now I’m in the position that there are several things that I’d like to implement but I don’t know which of them are doable in time and the most fun for the game. I’ve finished the achievements complete with graphics, tweaked the performance and balance of the game and added a random weed value for selling. Not sure what I want to add next. Probably I’ll do the missing graphics for the implemented upgrades first.

3 h, 35m left: Upgrade graphics are done. And not only for the buttons but they appear in game as well. An automated seller upgrade was also added. The last hours are ticking down and my brain starts to get real slow. I don’t think I will be working until the end but there are some things I want to finish before submitting my game:

2 h, 50m left: I finished that list fairly quickly so theoretically I still have time for two other upgrades and police events. I hope it’s not a mistake to start this now. 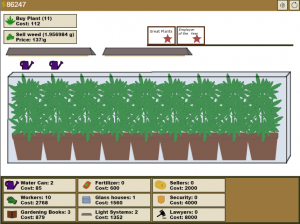 Tweets von @arabrabadanak
This website stores some user agent data. These data are used to provide a more personalized experience and to track your whereabouts around our website in compliance with the European General Data Protection Regulation. If you decide to opt-out of any future tracking, a cookie will be set up in your browser to remember this choice for one year. I Agree, Deny
522
This site uses cookies: Find out more.